It was like a gathering of old friends. High Fives outside the school, everyone finding out how their teammates were doing these past few years. Some better, some not much better, some fatter, some skinnier. But everyone wore the same cheesy grin on their faces. After a false start weeks back, 11-a-side has finally returned!

Playing against Ventz FC for the first time, manager Boonk named a strong starting 10, and put himself inside to even things out. Zad in goal, with Tommy and Hashiq at centreback. DQ reprised his role on the right and a much slimmer Weijie on the left. A clean shaven Taufeeq was paired in midfield with Fareez, while Heede played on the left and the speedy (hahahahaha) Boonk on the right of midfield. Up front, TikTok star Dzul and the ever-white Andy led the line.

Despite the first half being riddled with bad passing, poor control and all kinds of funny errors, everyone was having a whale of a time!

But some things never change.

Tommy, after the first 5 minutes, cannot be found in defence anymore. Zad's goal kick threatened to reach Yishun on a few occasions.

But it was a cagey affair. Both sides struggled to settle into any kind of momentum.

It was Ventz who struck first, after a melee in front of goal, a Ventz boot struck the ball into Zad's goal to give them the lead.

Hafiz and Haiqal came on midway through the half for Fareez and Boonk, whole Bob came on for Heede. Almost immediately, two of the subs combined for the team's first decent chance. A run down the right saw Haiqal hook the ball back outside the box, where Bob let fly a volley that screamed past the post.

The teams went into the break 1-0 to Ventz.

With no-one dying, yet, the same team was sent out for the second half, with the only change being Boonk for DQ. Within the first 5 minutes, AC United found the equaliser.

A mazy run down the left by Heede left his marker for dead. The tricky winger then fired a dangerous low ball along the byline into the 6 yard box, where the predatory Dzul deftly guided past the bewildered Ventz keeper and into the net.

Slowly but surely, AC United started to see some of their old flair return. The team started playing out from the back, with Boonk being Zad's preferred outlet. Short passing, quick movements started to return to their game and they started to resemble the AC United of old! 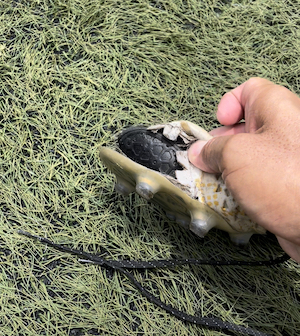 Boonk's shoes tore just when the penalty kick was conceded. He went to the car to get his otherpair of boots and returned to see the player Tommy fouled still lying on the floor.

just when everything looked rosy, a familiar scenario appeared. A Ventz striker made his way into the AC United box and with a swing of his tree trunk-like leg, Tommy sent the striker into A&E, right in front of the referee! If this wasn't a friendly, Tommy would have been shown 3 red cards for that 'tackle'! As it is, he was only shown a yellow and given a verbal warning.

Fortunately for AC United, Zad's imposing frame sent shivers down the penalty taker's spine and the striker smashed his penalty into Zad's crossbar, while the follow up went harmlessly over for a goal kick to AC.

As ever, Tommy showed his ability to affect the game on both ends of the field.

Hafeez's industry won his team a corner. Hafiz stepped up and sent a long searching ball into the Ventz box. And who else but Tommy was there to power a Tommy-esque header into the net, and in the process mowed down 4 defenders who had the misfortune of being within 5 metres of this behemoth.

Buoyed by the goal, AC United started to threaten more and more. Dzul skipped past the left back and ran down the byline before gifting Andy the ball on a plate, only for the super white striker to side foot the ball just wide of the mark.

The third goal finally came, again from Hafeez's hardwork. The AC United striker played the ball to Bob in the middle, who sliced the Ventz defence with a delicious through ball into the path of the marauding Andy. Cool as a white cucumber, striker Kong swept the ball home with his trusty left foot to give his team a two goal lead.

There was still time for Ventz to score their second, with their striker latching on to a ball played behind the AC United defence to bookend the game with virtually the last kick of the game.

The manager, although having torn both his boots, was well pleased with the turn up.

"It has been almost 2 years to the day since we last played together," said an emotional Boonk. With a tear in his eye, he continued,"It really puts into perspective what we have here. We are not a social footballing side. We are a group of friends brought together by football."

With the current guidelines eased to allow team sports to resume, we hope to see more and more of the old AC United players return for a kickabout.