Everyone remembered the last time we played Jyoto91 like it was yesterday. It was a friendly played at Naval Base Sec last year and we had a decent line up. Lost 6-2 though. That day will forever be remembered as Lee-day. To guys like Taufeeq, Hafeez, and the especially traumatized Muhsin, it was a day that will forever be etched in their minds and burnt into their memories.

It wasn't as memorable this time round though. There were still talking points, especially Tommy's 10 minute cameo that ended with him emulating Ip Man's Qigong move to floor the opponent's striker with a shrug of his ginormous shoulders. But in terms of moments of sheer madness, this was comparatively a tamer affair.

The 2 Kevins started the game together for the first time, with Stanlake in goal and Wun on the right of a 3-men defence. Sexy strong Steve and yummy yan Yan (sorry. Your name very hard to find rhyming words) made up the rest of the backline that will be tested early on in the game. Torpedo Taufeeq, Babelicious Bob and Lactating Leroy started off in the middle of the park, while Gas-Powered Gullzar played on the right and ActionMan Andy on the opposite side. Up top, Aerodynamic Ahmed and Ballistic Ben led the line. 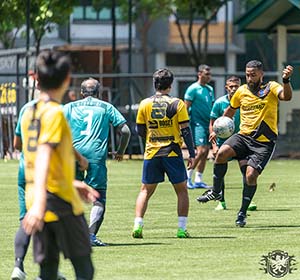 Jyoti91 took the early initiative and had the lion's share of possession. But it didn't take long for the AC United team to settle down and get themselves back into the game.

The battle was largely fought in midfield as Taufeeq and gang fought tooth and nail to eventually reign supremacy in the middle of the park. The Jyoti91 threat was for the most part, coming from their captain on the left but Yan was equal to the task, and on many occasions, had the winger sitting pretty in his pocket.

The breakthrough though came after a tactical switch, with Amirul and Syad coming on for Ben and Andy. The change paid immediate dividends, with Amirul winning a freekick just outside the box. The AC striker took the resulting freekick, with his low shot deflecting off a Jyoti91 defender and in the process, wrong footing his own keeper and into goal for the first goal of the game.

Jyoti91 hit back almost immediately with a goal of their own. The referee awarded a fortuitous penalty to them after what looked like a foul outside the box. Kevin guessed the right direction and got a hand to the shot but just could not keep the ball out. 1-1!

Barely 5 minutes have passed when Jyoti91 got another goal against the run of play. A long ball into the AC box was not properly dealt with and the Jyoti91 striker was first to react, poking the ball past the stranded Kevin to give his team the lead for the first time in the game.

There wasn't much else to talk about for the rest of the half, other than players of both sides trying to piece together strings of passes under the hot Sunday afternoon sun.

The second half saw Hafeez, Dayat, Tommy and Faz take to the field as AC United looked to go on the offensive. Didn't take long for them to get a penalty of their own. A long ball to Amirul saw the striker deftly turn his marker before speeding into the box. A mistimed tackle later, Amirul was on the floor and the referee pointed to the spot. The striker proceeded to smash the penalty home with such force that a sonic boom could be heard from as far as Pasir Ris! 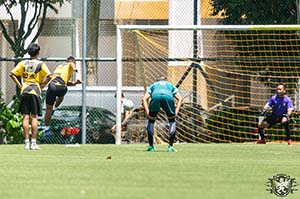 The force of Amirul's penalty reverberated around the neighbourhood

And then it came.

Jyoti91 just had an attack snuffed out and tempers were starting to fray.

Tommy saw a Jyoti91 player gouding Bob and the red mist descended. With an almighty Haduken, Tommy sent the said Jyoti91 player sprawling to the ground. The referee served Tommy a bowl of RED bean soup and AC were down to 10 men for the rest of the game. The team were clearly emphatizing with their teammate, as shown in the following memes... 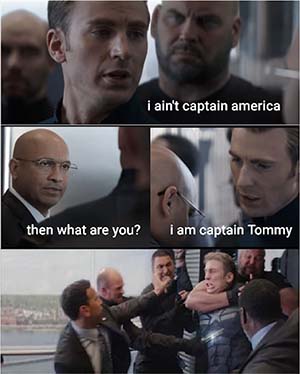 He literally could have said this on the field coz this was the end result.

With Tommy out of the picture, Jyoti91started to ping long balls into the AC box and without Tommy's physical presence, the plan worked a treat. A long ball found their striker and after sidestepping his marker, the Jyoti striker struck a sweet shot towards goal. Yan sprinted back to clear the line, but could only deflect the ball into his own net.

3-2 to Jyoti91, and with only 15mins left on the clock, things looked ominous for the team in yellow! 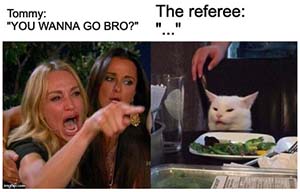 As the clock ticked down, Gullzar had a shot cannon off the bar, Amirul missed a shot from 5 yards out and Ben had a penalty call that did not go his way.

Just when it looked like another one of those days, up stepped Gullzar. An innocuous freekick was conceded 40 yards out on the right. With an almighty heave, the pacy AC United winger sent a deceptive lofted ball into the box that sailed over the stranded keeper ad into goal, much to the amazement of players of both sides!

Within minutes, the game ended, with both teams sharing the spoils at 3-3. 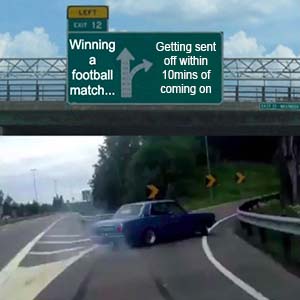 Is this what goes on in Tommy's head?

Though happy with the fightback, centreback Steve rued the decisions made in defending situations.

"We played pretty well but too many errors," said the man with passion oozing out of his ears. "Like I said at half-time, we need to work on our tackling, more specifically, which zones to commit and which zones not to.

"Without the first penalty, or the red card, we would have won I think comfortably. We played the ball on the floor quite well for most of the game and made some good chances."

When it came to the tactical side of the game, he felt some of the passes were too rushed.

"Our problem sometimes is players do not have a plan before they receive the ball. So we beat a man but then lose the advantage as we don't know where to go next. It should also be more of a viable option to play backwards and protect the ball, backwards and sidewards safe 5-10 yard passes, especially when it is hot to preserve energy.

"We are evolving as a team and as long as we develop these skills we will improve."