Despite fighting tooth and nail all afternoon, AC United was found wanting as league leaders Chillax demonstrated their clinical side to put 4 past our boys as they walked off 4-1 winners at St Gabriel's Secondary under the scorching Sunday afternoon sun.

It was never going to be easy.

But the AC United boys, themselves on a good run of form, fancied their chances with stalwarts Sean, Khai and the visiting Tobi in their ranks.

The team's number one Kevin started in goal, with Sean anchoring a back 3 that included Alex and DQ. Taufeeq, General Khai and Heede ran the engine room, leaving Gullzar and Tobi to patrol the flanks. Up front, Ahmed and Ben emulated the Heskey-Owen partnership for AC United. 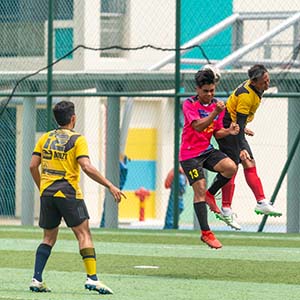 DQ tussling for the ball in the air

2 quick goals though tilted the favour towards Chillax. A counter attack followed by a set piece, and AC United were 2 goals down. Chao came on soon after as the gaffer looked to change the dynamics of the team and it paid immediate dividends.

Heede was the first to react to a loose ball and quickly found Chao in space. The sneaky one then darted into the box before chill as a cucumber with ice in his veins (cucumber has veins?), he slipped the ball under the advancing keeper to bring his team back into the game. 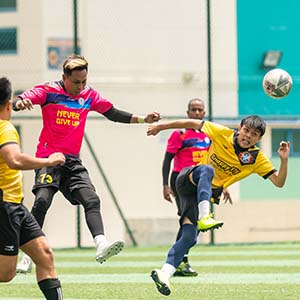 Snow and Eric, as well as Muz, all came on in the first period to try and force the issue but the score remained till halftime.

The second half kicked off with Jason and Ben up front, but the next goal unfortunately was for Chillax. A mistake in the AC United half was pounced on by their striker and his early shot caught Kevin by surprise and restored Chillax's 2 goal lead.

AC United were now chasing shadows and it was inevitable that Chillax scored a fourth before the end of the game.

They huffed and they puffed, but ultimately, wasn't enough as AC United fell to Chillax 4 goals to 1. 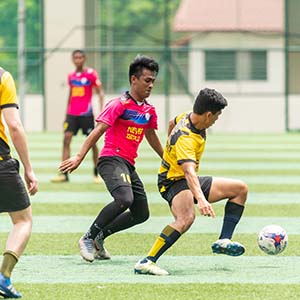 Muz stealing the ball away from his opposite number

The manager was asked about the result and answered pragmatically.

"They are league leaders for a reason," Boonk replied with a deadpan look on his face. "We didn't do much wrong. Maybe we could have marked a little tighter for the second goal. Maybe we could have released the ball earlier and not get caught in possession for the third. But truly, Chillax are on a different level, in terms of technical ability and fitness.

"All I can say is we played hard and did what we could, but thank god we don't play Chillax every week."